This year took us to new frontiers. We established a second office in the Triad, allowing us to better serve central and western North Carolina. The new office is coming along nicely, thanks to Skip’s artistic eye and Jessica’s perseverance.

The walls are awaiting a fresh coat of paint (Carney blue, anyone?). Then we will share the final product. We cannot wait to host Triad clients at our new location. 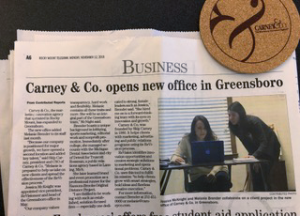 In addition to locations, we also expanded our digital marketing services. Our new hires have allowed us to dig deeper into social media, Google Adwords and other digital marketing platforms. We have been in digital for awhile – we even have our own green screen and studio to create web commercials in-house – but the landscape is constantly changing, and we’ve been transforming along with it.

However, transforming services doesn’t compare to changing hearts and souls. We were pleased to produce and promote the ReNew18 Pastors Conference at North Carolina Wesleyan College this October. Skip was on the speaking panel alongside President and CEO of LifeWay Christian Resources Thom Rainer, and President of Artistry Labs Richard Reising. Thom Rainer has authored more than two dozen books on church.

Skip has been sharing the book’s message far and wide. Visit facebook.com/skipcarneyauthor for more information on his upcoming author events.

We were also fortunate to produce and promote the Marketing Innovation Experience at North Carolina Wesleyan. This event went by the nickname MiX, or #MiX18NC for the social media savvy. It was an empowering conference, and Skip spoke on a panel of great innovators.

Amidst all the changes, our ReVision process remained a staple in the unique services we provide. We enjoyed facilitating four large ReVision sessions this year, with some mini-sessions sprinkled in.

Skip founded this marketing innovation agency in January 1980. Here we are nearly 39 years later, as passionate and innovative as ever. Thank you to all our clients and contacts. You challenge us to be the best version of ourselves, and we are fortunate to play a role in your success.

Thank you for letting us serve you another year. We know 2019 will be our best yet. 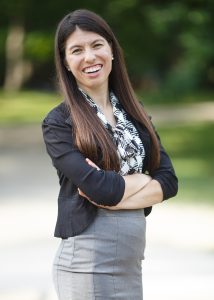 “Because our company is positioned for major growth, we have opened a second location and added key talent,” said Skip Carney, President and CSO of Carney & Co. “Melanie is prepared to help us take on new clients and spread the effectiveness of the ReVision™ process.”

Jessica McKnight, head of the Greensboro office, said, “Our company values transparency, hard work and flexibility. Melanie contains all these traits and more. She will be an integral part of the Greensboro team.” McKnight was appointed to Vice President, ReVisioneer, and head of the new office in May.

Brender boasts a unique background in lobbying, sports marketing, editorial work and non-profit promotion. Immediately after college, she managed accounts with the Michigan Dental Association and city of Detroit for Truscott Rossman, a public relations agency based in Lansing, Michigan. She later learned brand and event promotion as a professional runner for the Hansons-Brooks Original Distance Project.

“I am thrilled to be working with such an established, solution-focused firm, especially one dedicated to strong, female leaders such as Jessica,” Brender said. “She hired me on to a forward-thinking team with its eyes on innovation and growth.”

Braswell Family Farms got outside the egg carton to market innovation 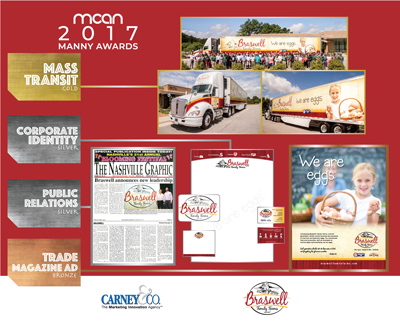 Maybe your company or organization is facing some milestone moments and looking to get a better foothold on the future, like the fine folks at Braswell Family Farms.

While Carney & Co. doesn’t have a crystal ball to predict the future, we saw the potential along with the leadership team at Braswell Family Farms to ReVision the 74-year-old company. The premier supplier of poultry feed and eggs in the mid-Atlantic and southeast, the company was facing challenges in the path they could see for the future, including becoming a commodity in the marketplace. With third-generation family leadership stepping up, they took advantage of a 2-day ReVision to go through the process of identifying innovation in their business by determining the WHY? within their company and their customers.

Together, we were able to identify solutions to key problems, both internally and externally, clarifying the company’s future direction and the roles of its employees, and repositioning their brand to showcase the quality and value of their specialty feed and eggs.

The result was a better understanding among employees of what lay (no pun intended) ahead of them and what their responsibilities were. The new branding strategy created a more unified message, which emphasized the company’s family-owned-and-operated aspect and made it clear that they were dedicated to the quality of the final product from feed to food, with the tagline, “We are eggs.”

A new campaign was then put into action which utilized this refocused identity, resulting in four awards at the most recent Marketing Communications Agency Network competition. These included a Gold award for Mass Transit, Silver awards for Corporate Identity and Public Relations, and a Bronze award for Trade Magazine Ad. And, by marketing innovation, Braswell Family Farms is standing out from the flock.

Looking to break out of the carton with your marketing?
Contact Jessica@carneyco.com

It’s all in how you say it.

0
By Jessica McKnight Posted on June 5, 2018 in News, Observations

At Southern Bank, that starts with being exactly who they are… Southern. Where hospitality is a given and the people behind the counter are the same ones sitting next to you at the big game on Saturday or church on Sunday. Where, when you pass at the grocery store, you say “Hey!”

More often than not, what you say tells just as much about you as how you say it.

Through strategic marketing based on the ReVision process, Carney & Co., The Marketing Innovation Agency, helped Southern Bank better communicate their unique personal and professional banking relationship style. By being better business partners with firms in their hometowns, Southern’s community involvement not only leads to positive business interactions, but more importantly, makes an impact on the local community. 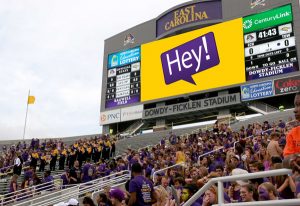 Take for instance, the Greenville, NC, area, home of East Carolina University. With 5 locations within a 20 minute radius, Southern Bank is an integral part of ECU and the Greenville area. Rather than focus on the beautiful banking facilities, convenience or services, Southern speaks volumes through their partnerships in the community. The Southern Star Awards recognize local folks for helping make a positive impact in their community. And sponsorship at home football games with a Jumbotron Spot brings the entire stadium in on the act, with 20,000 fans shouting Southern’s signature “Hey!”

Southern can easily say they can make your money work for you. They have all the bells and whistles to do your banking in a branch, in your office, or in your pajamas. But the difference, the Southern difference, is that Southern speaks their customers’ language. They’ve been doing it since 1901.

Hey! Need your marketing to speak so your customers listen?
Contact jessica@carneyco.com

0
By Jessica McKnight Posted on May 29, 2018 in Branding Agency, Graphic Design, News

Indoor Air Quality (IAQ) is a hot topic on every homeowner’s mind and Carney & Co. client Field Controls has an innovative solution in their Healthy Home System. This ultimate air purification system also saves money because it is added to the existing HVAC system.

“Carney & Co. and Field Controls have worked in partnership for over 30 years,” said Patrick Holleran, President of Field Controls. “They get us. And they make us better. We’ve gotten out of our proverbial box and approach our marketing from our customers’ point of view, which has made all the difference.”

(Rocky Mount, NC) – Carney & Co., the Marketing Innovation Agency, announced today that Ashley Major is now an Account Coordinator. Ashley started as an intern in 2017, while still a student at North Carolina Wesleyan College. She will work closely with clients and the agency team to ensure flawless execution of marketing innovation campaigns.

“Ashley is a great addition to our growing team. As an intern she was eager to learn the business, ready for any task, and fearless. We are excited to see her continue to grow and add value to the team,” said Skip Carney, President and CSO of Carney & Co.

“Ashley Major is a shining example of what our college is all about,” said Dewey Clark, NCWC President. “She was a committed student, a Christian athlete, and was eager to get involved in the community. She is already making a difference in Rocky Mount.”

For additional information, contact Jessica McKnight at 252.451.0060 or jessica@carneyco.com.

Carney & Co, the Marketing Innovation Agency, has been taking care of brands since 1980 and focuses on Marketing Innovation using its unique ReVision™ process. ReVision identifies innovation opportunities and creates strategic solutions to marketing and operational problems. With offices in Rocky Mount and Greensboro, the company is positioned to work with clients throughout the southeast. Our job is to change the future.